On Sunday I had the opportunity to go to my first ever movie premiere – Red Carpet and Oscar Winner included!

It took place at the Sendlinger Tor cinema in Munich – which is celebrating its 100 year anniversary this year, and still owned by the same family. It is a beautiful old cinema in a theatre style inside. I really enjoy going there.

Anyway, back to the movie – it was the new German film “Exit Marrakech”. It is directed by Caroline Link, who won a foreign film Oscar for “Nirgendwo in Afrika” (Nowhere in Africa). It stars Ulrich Tukur and newcomer Samuel Schneider.

It is set mostly in Morocco, and is the story of the relationship between a father and his – and their adventures in the country. I haven’t been, but am told that it is an accurate depiction of the country (without being a travel programme of course!).

It was such fun to see the red carpet, the cameras photographing the actors and director on the carpet. To be in a packed cinema with welcome speeches in the beginning, applause at the end, and followed by the whole crew and cast on the stage. It was cute when Samuel, the son in the story, took the microphone in hand to thank the director for her trust in him and giving him the chance. 🙂 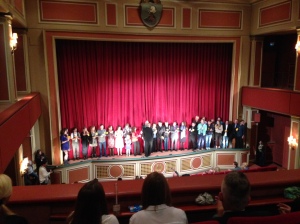 After all the Thank You’s we were invited to Cafe Cord for the Afterparty. It was packed, but I did find the director and told her how much I enjoyed the movie. She was so friendly and down to earth.

Fancy that, though – shaking the hand of an Oscar winner 🙂 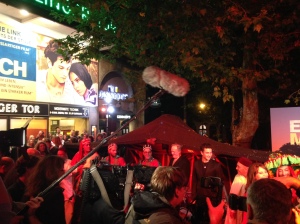 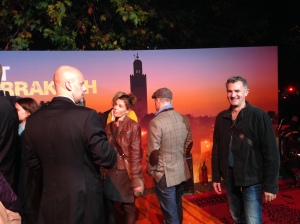 visitors to world of adt